On Thursday night I had the honour of presenting a paper in front of an engaged crowd at the Greek Centre in Melbourne. As an outsider/insider, I am somewhat apprehensive about entering Greek community spaces—conscious of my poor language skills and maybe a little regretful about my lacking in ‘Australian-Greekness’. But this paper proved very rewarding, mainly for the responses it garnered from audience members.

To summarise, I was interested in what differentiated the Greek experience of Bonegilla from the experiences of other cohorts (approximately 15 000 Greek migrants passed through this particular Department of Immigration centre). Of course, a number of factors could shape any cohort or individual’s experience of these places of mass migrant reception and ‘processing’. Every person came with specific wartime and postwar experiences and a politics shaped by these experiences, and therefore different expectations of their stay in Australia. This point is important to remember in any history of immigration—as Sara Wills puts it, we need to acknowledge both the “push” and “pull” factors when studying immigration and those who make the decision to migrate. There are obviously circumstances specific to the Greek civil war and economic hardship that shaped the mindset and attitude of the Greek postwar migrant. These are tricky issues to unpack. Yes, some came and expressed absolutely no interest in politics; others arrived and quickly sought out comrades, joined the leftist Democritus League, or even their local CPA. Some have also argued that postwar Greeks had a strong leftist bent; they certainly had high rates of union membership.

In her history of the Department of Immigration, Ann-Marie Jordens argues that Southern Europeans (especially rural migrants, which constituted the majority of Greek migrants at this time) expected little of the state. They relied instead on family and community networks, often defined by village or region. I’m not sure if this played out in recollections of the Greek experience of Bonegilla. Many remember their parents or uncles simply leaving the centre of their own accord, travelling to Melbourne, and finding work through community connections—that is, they left Bonegilla without the sanction of a Commonwealth Employment Officer, or, in some cases, those under work contracts “absconded from allocated employment.” But the examples I’ve gathered don’t necessarily reflect a Greek migrant politics that rejected state interference, a politics formed during the Greek civil war and in the face of authoritarian rule. In many cases, their early “escape” from Bonegilla and reliance on strong and well-organised community networks in Melbourne proved to be a practical response to an unknown context and a foreign language.

The nature of some of these networks were revealed to me further in the course of conversations throughout the night. More than any other group, Greek migrants absconded from their contracts, and found their own work in Melbourne—largely through the help of established networks (including the Greek Orthodox Community, but also village networks). The Democritus League, a leftist labour group for Greek workers based in Melbourne, sought to help migrants at Bonegilla. Members would often visit the centre to advise newly arrived Greek migrants about their rights. One audience member recalled these visits, and their attempts to get the migrants to organise and protest. Peter Tsitas visited the centre with other members of the League when he was 18. The conditions he witnessed there left an impression on him, and he felt compelled to sketch and paint what he saw. He was kind enough to share with me an image of his haunting painting of Bonegilla: 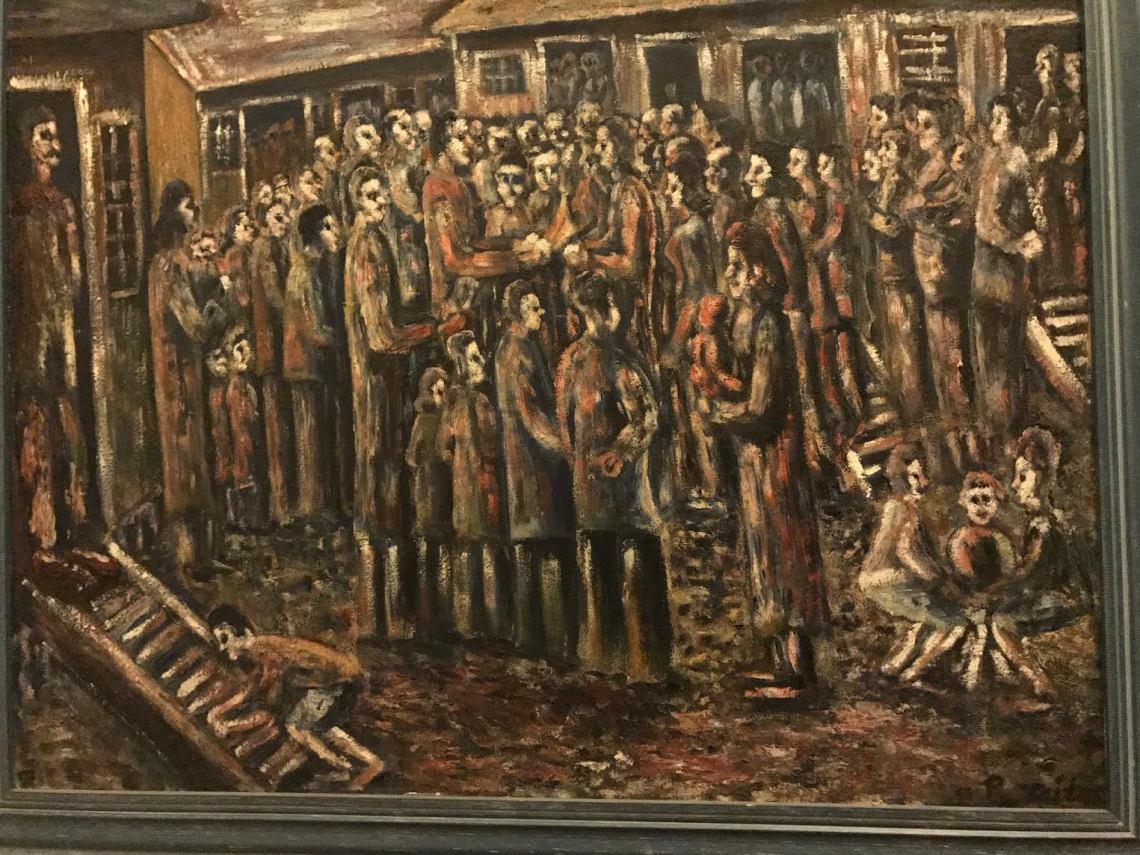 Another audience member asked whether I considered the complicity of the Greek government in the outcomes of the migration scheme, which saw some migrants stuck in Bonegilla for months without work or labouring on remote farms under poor conditions and for little pay.  I have not looked at this, and it would make an interesting study to consider the Greek government’s response to dire reports coming out of Australia during the 1950s.

After the early 1950s, the number of Greeks at Bonegilla fell, and very few Greek migrants passed through Bonegilla beyond the late 1950s. The majority of the 160,000 Greeks to migrate to Australia by the 1970s were privately sponsored and thus avoided Department of Immigration centres. In 1961, at the time of the second major work riots at Bonegilla, there were only 32 Greek migrants in the camp, at a time when over 2000 accommodated there. In summary, relative to other groups, community networks, especially those in Melbourne and including the Greek Orthodox Community, offered extra supports to Greek camp residents, helping them to ‘escape’ quickly, and find work and homes outside of the contract system and the supervised allocation of the Commonwealth Employment Office.

I’d like to thank Nick Dallas and the Greek Orthodox Community of Melbourne and Victoria for inviting me to speak, and the Ithacan Philanthropic Society and Kon Tsmentis-Floudas for sponsoring the event.

This blog details the research developments and reflections relating to my project ‘Making Migrant Heritage’, which asks: How do communities across Australia engage with and interpret official heritage practices and language in order to make their migrant and settlement pasts public?